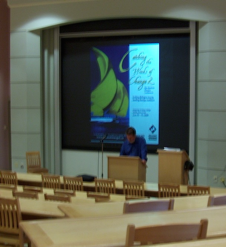 The purpose of these conferences is to identify and address gaps in the mental health field and issues in the broader social environment. Prominent social scientist, practitioners, academics, researchers and social activists are then recruited to participate in workshops, forums, think tanks, and discussion groups in order to address these gaps and issues with collaborative, competency-oriented ideas and practices. Participants are invited to engage in spirited dialogue about the intersections and contributions of their own work to the broader therapeutic conversation and social transformation. These conferences offer breakthrough ideas, which have influenced the practices and social policy in the field at large. The unique structure of the conferences elicits high energy and strong involvement from attendees. Networking is valued and encouraged as an important and generative feature of the conferences. Attendees catch up with old friends and meet new ones. Winds of Change Conferences make it possible to expand the knowledge in the field and open doors for possibilities, optimism and a renewed sense of community.

We place strong value on relationship and connection with one another. As such, Winds of Change Conferences are also popular for their inviting, inclusive and fun charged social events, which include live music, most often provided by conference presenters and participants.